Recently, I had the good fortune of taking my first vacation in over eight years. Of course, me being, well, me, I not only refused to fly and drove two days going and coming back, I also turned it into a working vacation. The idea was a good one, at least on paper: Drive to Norristown, Pennsylvania, visit with my younger half-brother and -sister, spend their birthdays with them, work on the autobiographical account of being adopted and searching for my biological mother, and bonus: get to see several dear friends that lived on the way. Like I said, it was a good idea on paper. And certainly, days one, two and three of the trip were exciting: I dropped in on my publisher, Charity Parkerson on the way, saw several beautiful states, got to stay with a dear friend, and got to see the beach.

Day four, however, started the working part of the vacation. I met up with my brother and sister (Dan and Becky), and spent time with them over breakfast, and after Dan headed off to work, Becky and I drove around the Montgomery County area of Pennsylvania, seeing the courthouse I was adopted at, the hospital I was born at, the houses our mother lived in when she was pregnant with me, and the home my parents brought me to after I I was born. Day five, Becky and I hung out in downtown Philly, and for the most part, behaved ourselves (seriously, it really

was necessary that I pirouetted in front of the security officer at the Liberty Bell!), and for the rest of the parts, did a lot of talking. But on days four and five, after I’d drive back to my friend’s house, I’d quietly break down in the room I was staying in. And while I did get to visit with my awesome friend Diana and see Princeton University, I started day six by going through old journal entries and emails I’d written and received, and ended the day in much the same way. Days seven and eight  were spent pouring over what I’d previously written for the book, and highlighting legal documents and emails to see what was and was not relevant to the story I’ve been writing for over ten years. Day nine was spent driving back to Charity’s house, and days ten and eleven were spent driving from Tennessee to Texas. That’s right. I said days. Because I managed to not only get stuck in non-stop severe storms once I hit the state line of Arkansas (which somehow, miraculously ended the second I hit the Texas state line), but there was construction. And mother fucking car accidents. At one point, I texted a friend and informed them I was going to hook a u-turn and just drive back to the east coast, because at the rate I was going? I’d get there faster than I would Dallas, which was about five hundred miles away.

But I want to back track to day nine. I saw a great deal, read a great deal, and spoke a great deal about how I came into the world that previous week. And though the friend I was staying with was kind enough to let me break down on their shoulder my second to last night, by the time I’d made the fourteen hour drive to Charity’s? I had been in my head, alone in my car, with nothing but negative thoughts in my mind. Heart sick, Charity and I sat down in her backyard with a couple of vodka-laced drinks, and I unloaded on her. And she listened to me talk about how afraid I was of writing this book, of facing all those feelings that had come up in the previous week, most especially in that long drive to her house.

“That sucks,” was her response.

To which, I laughed and asked, “Any more sage advice oh wise one?”

“Sure: That sucks, but you’ll get through it,” was her answer.

That sucks, but you’ll get through it. While I rolled my eyes, laughed, and made a smart ass comment in reply to these words (and yes, later posted them on Facebook, because Charity is hilarious), in the two and a half months (how in the world did the time go by that fast??!?!) since I arrived back in Dallas on October 1, I’ve thought on those words. And I’ve thought hard.

The fact is, whether or not Charity was being a smart ass, doesn’t matter. Okay, she was being a smart ass, but only because that’s Charity, and one of the many reasons I adore her. But stop and think for a moment on those words: That sucks, but you’ll get through it. That’s true of everything I’ve been through in my life, every health issue, every loss, every heart break. It’s sucked, all of it, but I have gotten through it. At times I may have just ignored it and pushed the pain off to the side in its own small box so I didn’t have to look at it too closely until I was able. Other times? I gritted my teeth and bore down and fought my way through, because there was no other choice.

I could have finished “Searching for Ellen” ages ago. In fact, it was on my New Year’s Resolution list this past year. I can point to my Amazon Author Central page, and my Smashwords Author’s page. I can direct people to iTunes and the two podcasts I do. I can say, “Um, hello! Three kids!” And I can recite the hospital stays my father has had right beside all my own medical treatments and appointments. I can do all those things. They’re still excuses for one thing and one thing alone.

I’m afraid to write this book.

You see, if I write this book? I have to face certain things about myself, about where I came from, and how I came to be in this world. I have to focus on, very sharply, the hurt that my birth caused a young woman who was wise and brave and loving enough to put aside her heartache and hurt in the best interest of her child. I have to look back and recall how it felt to have no idea what my heritage was, to have to say, “I don’t know, I’m adopted” when asked by a doctor what my family medical history was, to remember how lonely it felt to just not know who I got my odd colored eyes from. To wonder, and not know if I’d ever have the answer, if she ever thought of me.

I’d love to just say, “fuck it” and not write the book. Who wants to re-examine parts of their lives that are painful? Who wants to dredge up the courage to look at their life under a microscope and put out for all the world to see all the ups and downs of that life? Who wants to remember the frustration of not finding the person you’ve searched for over three years for, and not knowing if you’ll ever find them?

No one does. But I’m still going to.

Because to not write this book? To say “To hell with it, I’m not doing it!” would be a slap in the face to what any biological parent goes through when they make the heart-wrenching decision to give their child over to another family, to lose that opportunity to be called “mommy”, and to lose the chance of watching their child grow and develop. To not write this story is to minimize what I, and millions of adoptees have gone through when they make the choice to search for their biological parents. During my search? I would have loved to have known I wasn’t alone, that I wasn’t the only person who had gone through the isolation that comes with doing something that only another adoptee can understand.

I began writing “Searching for Ellen” in 2000, for myself. It started as journal entries, my only way of keeping hold of my sanity as I went through the frustration of searching for my biological mother. And while it’s my story, it won’t be finished, nor will it be published for myself. Instead, I’m gritting my teeth, grabbing a hold of my metaphorical “Oh Shit!” handle, and holding on tight and writing it for those who have been where I or Ellen have been. I’m writing it for my children, so they understand what it truly means to love someone so much, you’d go through a much worse hell for their sake. I’m writing it for Ellen, so she knows that the sacrifice she made was worth every tear she’s ever cried. And I am writing it for every person who ever gave me their time, their prayers, and their love, saying with their actions, not their words, “You matter. You have a purpose in this world.”

Wednesday, January 2, 2013, I’ll wake up in the morning, grab a cup of coffee, and check my email and social media. And then I’ll pull out my huge file of documents and emails and journal entries, open up a word document on my computer, and I will tell my story. And it will hurt like hell, and I’ll cry, and I’ll want to quit, but I won’t.

Because as my dear friend told me back in September? “It sucks, but you’ll get through it…”

PS: I posted this blog at around 2 a.m. this morning, and when I woke up at 8 a.m., I had received an email from my younger sister, Becky. Becky has been the master behind several of my book covers, the most important of which is “Searching for Ellen”. After reading the post, my sister was bad-ass enough to create the awesome picture you see below, and told me to print it out and look at it when it got hard to work on “Searching”. Yet again why sisters are awesome, and why my sister is so bad ass, it rubs off on those around her. Thank you so much Becky! 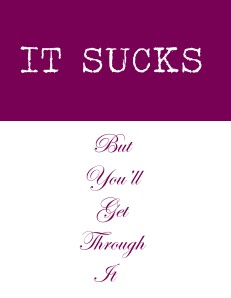 Uncategorized
← The Operation Kindness Project What I remember →