“The Eve of Leaving”

Leave a comment Posted by Amber Jerome~Norrgard on January 6, 2014 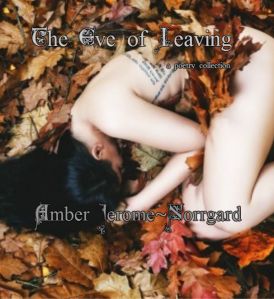 January 4 was a big fat deal for me: I got two new tattoos (well, the same one actually, except reversed under the words “courage” and “faith” on my wrists, which I’ll have done as spacers in between the words I’ll have placed there in the future), I celebrated the second anniversary of publishing my first book, and I, drum roll please, published my twenty-first book.

And it’s amazing how much things change in the space of twenty-four months. Back in January of 2012, I sat with my  hand hovering over the “publish” icon for hours before finally gaining the courage to take the final step to becoming a published author. Two years later, my hand hovered, but only for the reason I was being a smart ass and saying, in a very annoying voice, “Should I? Should I do it?” over and over until the friend I was having coffee with rolled his eyes and hit the button for me, not so I’d publish, but so I’d shut the hell up already.

But looking back over the past two years, it is amazing how far I’ve come. Used to, publishing was something that terrified me: I actually would have someone talk me into it, and I’d worry that my work wasn’t good enough, or that the work sucked, or that people would hate it. And people have hated my work and told me so in reviews. And what I learned from that is that while not everyone will like what you put out there, and you’ll feel disappointed (or massively depressed as I was with my first one-star review), there’s something to be learned from things not going how you hoped.

Such is the subject of The Eve of Leaving.

Love is one hell of an emotion. And one that is talked about and written about more so than any other emotion we feel. Songwriters wax poetic about falling in love and scream harshly about the same love when it ends. There are genres and sub~genres on the subject. Card companies always make budget due to the idea of love.

I myself am a writer about love, but more often than not, I focus on the idea of steering clear of the hearts and flowers aspect of it. I’ve written poetry and essays about the love between parent and child, long~time friends, life, and of the written word.

And I’ve written about the end of love. But I’ve never focused on only that.

So The Eve of Leaving is a collection of poetry written from the point~of~view of a person at the end of a relationship, during the falling~out~of~love period, during the heart~wrenching time after the break up. I drew on my own personal experiences, both good and bad, as well as those of loved ones after I asked them if they minded my using their stories for inspiration.

And as hard as it can be when we lose someone we love, still it’s a beginning. Because from each loss there are lessons to be learned, things to take with us. And eventually, the hurt will hopefully fade into something sweet we can look back upon and smile.

If you’ve never experienced the loss of a soul~mate or lover, than you are one of the lucky ones in this world. And if you have, I hope my words are a balm to your hurt.

You can snag The Eve of Leaving at Amazon.com and Smashwords.com and sooner (hopefully) than later, through CreateSpace.com.