The Man~Cub Turns Two… Wait, how did that happen?

With big blue eyes, the red hair he received from me, and dimples that flash beatifically when he smiles, my son is going to be quite a heart breaker when he grows up.

He’s also the single most amazing miracle of my life.

He’s turning two in a few days, and I am just amazed that this little guy, this sweet baby boy, this amazing person is someone I’m 50% responsible for bringing into the world.  I could wax poetic about the passage of time, how quickly it goes by, but I’ve done that.  Multiple times.  Instead, I think I’ll just tell the story of how I went from thinking I was finished having kids, and was gifted with such a blessing in my life.

It might have been comical, if I had not been so horribly sick to my stomach.  The irony of the situation alone is so incredible, I look back and am amazed it actually happened, and I myself lived through the experience.

I was one of the 1% who became pregnant while using the pill.

After being diagnosed as “infertile”.

I’m well aware that there is a possibility that you can get pregnant when you have sex, even using precautions, and being careful.  But having been diagnosed with both Endometriosis and Poly-cystic Ovarian Syndrome in my 20’s led me to believe that taking a daily dose of birth control was pretty much a guarantee I could get freaky with my husband of five years with little to fear other than our two daughters coming in our bedroom and catching us in the act.

In complete honesty:  I wanted a third baby.  I’ve always known that I wanted children, by either biology or adoption.  If you would have asked me, years ago, back before I was knee-deep in diapers and wipes, sippies and pacis, I would have said that three would have been my magic number for having children.  But when I met, fell in love with, and married my husband, we agreed to two children.  That was his magic number, and for me, I’ve always believed that planning to have a baby should have both partners on board 110%.  There’s also the fact of my own fubar’d DNA: Motherhood was hard won for me: Failed rounds of Clomid, cycle charting, temperature taking, scheduled sex, and finally, surgery to conceive both my daughters.  The emotional toll trying to get pregnant took on me was so exhausting, that the idea of trying for a third baby was out of the question.  We had two beautiful and healthy children.  Why tempt fate when we had been so very blessed already?

The true comical irony of the situation?  Two weeks before I was informed by an emergency room doctor that I was pregnant and not suffering from the stomach flu, my husband and I had gone out with another couple.  During dinner, we began talking about infertility and everything that goes with it, and I can recall saying quite candidly, “I always thought that when I became pregnant, I wouldn’t have realized it.  That I’d start feeling sick to my stomach, go to the doctor and be told that I wasn’t sick, but was in fact pregnant.”

I’m guessing when those words left my mouth, that God, in his infinite wisdom and skewed sense of humor nudged Saint Peter in the ribs and said, “Hey, watch this!”

I spent the nine months of my pregnancy terrified that I’d lose the baby.  It had been far too easy to get pregnant the third time, and having suffered a miscarriage in 2007, the fear of loss was very real and immediate for me.

The day of my son’s birth arrived, and I was shocked when my epidural wore off right as I had to push.  Everything but the physical pain on the experience  lost focus, becoming blurry, and almost non-existent.  I never thought I would be able to withstand the pain of child birth.  But at that one single moment in my life, pain ripping through my body, I turned inward and found a core of strength I had no idea I possessed.  In that one moment, I was beautiful, strong, capable and invincible as I had never before been in my life.  Amber: 1; Pain: 0.

I can remember being worried that my second child, Autumn, would be jealous of her new brother.  I actually, in a fog of pregnancy induced exhaustion and panic once asked, “What if she tries to eat the baby?!”  But laying eyes on her new brother, Autumn quickly fell in love with the little guy, and the two have been driving me bat-shit crazy and making me laugh my ass off ever since.

Benjamin is quite simply the most amazing wish I was afraid to make.  I never dreamed I’d be so blessed in my life.  Almost two years have passed since he came into the world, spraying the doctor and nurses with urine in his anger at being removed from his warm, quiet, and snug home.

There are no doubts that he is officially my last baby:  In November of 2010, I chose to have my uterus removed in a partial hysterectomy.  My uterus gave me years of pain, but it also gave me these three miracles that I never thought I’d get to see. 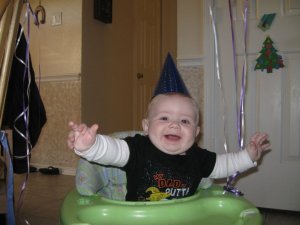 I had no idea it was possible to have your heart being held by three people, and to not mind it one bit.  My son, as well as my daughters, are the greatest examples of unconditional love, beauty, and strength that I have ever had in my life.

So, as I’ve done for my daughters on their big days, I’ll do for my son.  Benjamin’s favorite things are: watching the Bubble Guppies (much to my sanity’s chagrin), brown rice with raw red onions, climbing the stairs by himself, throwing coffee all over the living room carpet, a full sippie cup of apple juice, balloons, any body of water he can make a mess in, popsicles, Momma blasting Red Hot Chili Peppers while in the car, and his sister Autumn calling him “Beggie”.  His least favorite things are: The word “no”, the theme music to Wow Wow Wubbzy, not being allowed to use the bookcases to practice mountain climbing, having his diaper changed, and Momma not letting him put everything he picks up into his mouth. 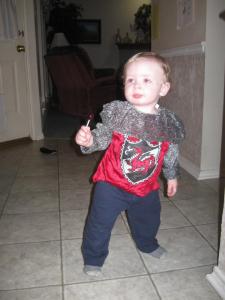 He is such a blessing, such an amazing gift I never asked for.  He is the greatest unexpected surprise I could have been given, and I am grateful daily for the chance to be a mother three times over.  He is the piece of my heart and soul I had no idea I needed to be complete.  His babyhood is blowing away so quickly, leaving only photographs and stained onesies, but I will not forget how the best gifts are the ones you have no idea you needed so desperately.

Happy Birthday Man~Cub!  It has been such an amazing gift to have watched you these past two years.  I cannot wait to see who you end up becoming my sweet boy!

Uncategorized
← Say it loud; Say it proud. An Interview with the Illustrious Dionne Lister →

4 responses to “The Man~Cub Turns Two… Wait, how did that happen?”