At age twenty-seven, I fell quite deeply in love at first sight.

The object of my affection was short, fat, had no hair except for a dark brown mullet at the back of their head, was happiest when I’d pop out my boobs and only communicated by screaming holy hell at me.

But despite all that, my first-born Amethyst was a total keeper. I’m happy to report that today she’s tall (almost to my shoulders when we stand side by side), has beautiful brown hair, is able to make her own snacks, and loves nothing more than going out for a hot chocolate to talk with her mother in the low tones she most often employs due to her natural tendency towards shyness.

Amethyst is the greatest dream I have ever had in my life, and with her birth, she gave me a name I’d longed for my whole life, “Mom.” And while the dream was one I’d wanted, the dream was hard to achieve: at age twenty I was diagnosed with Poly-Cystic Ovarian Syndrome, and at twenty-five with Endometriosis, both fertility issues that on their own can keep a woman from achieving biological motherhood. To this day, I can still remember the way the sheets of the hospital bed I was laying on felt in the recovery room at the hospital I’d had my first laparoscopic surgery at when I came to and my doctor told me he had found Endometriosis. My own adoptive mother had suffered from the illness, and the course of treatment for her was a complete hysterectomy at age forty. What followed my diagnosis was pain, both physical and emotional, tinged with fear at the possibility I might never know what it felt like to carry a life within myself.

I can remember a few weeks post-surgery, thick in the middle of hormones dropping and fears over riding every waking though, praying to God: “Just give me one healthy, happy baby. Just one. Let me have this one dream.”

It turns out God was listening. Six weeks after marrying Amethyst’s father, I found myself holding a pregnancy test in the bathroom at my work, watching the second line form and staring in disbelief at it. 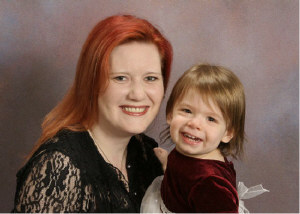 And pregnancy itself was a battle: morning sickness that lasted well into the second trimester before giving me a month’s break before starting up again in earnest in the third trimester, blood pressure issues that caused me to stop working, insomnia, low progesterone levels that required medicinical treatment that only added to the exhaustion and nausea. But still, every moment was worth it. I’d lay in bed at night, one or both cats wrapped around my belly, and I’d feel my baby shift within me.

I was certain I was pregnant with a boy. So certain that I bought several skeins of blue yarn and crocheted several blankets (there wasn’t much else to do since I was unable to work). On the day of my twenty-week ultrasound, I waited excitedly to be told I was carrying a boy. When the doctor told me I was actually carrying a girl, I felt as if I’d been told I was pregnant again for the first time. The idea I might have a baby girl had never occurred to me.

Amethyst’s birth lasted thirty-eight hours, the first twenty-five of which were unmedicated. It took me over two hours to push her out into the world, and I was so exhausted by the final push I had a mental image of her hanging on to the umbilical cord for all her worth shouting, “Hell no! I won’t go!” She was born covered in meconium, and it was ten minutes of terror while I watched the NICU team work over my daughter to ensure she suffered no ill effects from meconium inhalation.

When they finally brought her to me, despite years of having infant cousins and friend’s babies to practice on, my arms shook and my mind insanely thought, “If I don’t hold her right, are they going to take her from me?” I held her, finally, finally, after years of wanting and waiting, looked into her perfect face, and lost my heart.

About a month after her birth, I saw the movie Kill Bill. And at the end, Uma Thurman’s character lays on the bathroom floor, sobbing over and over again, “Thank you. Thank you.”  That’s what it felt like. Joy and gratitude, tears and hope, life in all its beautiful glory wrapped up in a chubby ten pound gift of a miracle I was blessed with.

With a younger brother and sister I have affectionately named “Things One and Two” due to their incredible ability to work together to get into everything under the sun, Amethyst is the one I refer to as “My Well Behaved Child.” Amethyst can be somewhat shy (although not so shy that she shouted, “I’m hiding in the car because I’m SHY!” at a friend when he said goodbye to her after meeting her, a story that still has us laughing almost a year later), but is thoughtful, considerate, kind, and compassionate. She loves arts and crafts projects, loves music and reading. Ever since she voluneteered at Pharr Road Animal Hospital she has had dreams of becoming a veterinarian. That’s not all though she regularly exclaims wanting to be a clothing designer, an author, and a ballerina. Amethyst is also extremely courageous: after a summer of stating quite emphatically she was absolutely not going to Kindergarten, she squared her shoulders, walked right into her classroom, and sat down at her desk. It probably helped that her teacher, the incredible Mrs. Berkline sent her a letter before the first day of school welcoming her to Kindergarten. And since she was brave, I kept my tears in check until I had cleared the classroom door and then sunk into a puddle of She was just my baby!

As a child, I’d ask my father who he loved the most, my brother or I. And he’d respond that he loved us both the same, just in different ways. I never understood that until Amethyst became a big sister herself: you love your children differently because they are different, and you yourself are a different person with each child that comes into your life to expand your heart farther than you thought it was possible to grow.

I think you can guess her favorite color…

In June of 2012, I reconnected with an old friend. After attending a writer’s workshop together, we went out to lunch. And he asked me what I had learned from being a parent. “That I have far more patience and love than I thought possible,” was my response to his question. And that is what the grace of motherhood has taught me: that there is no end to patience or to love when your heart has been stolen from you. I look at my daughter, at her beautiful, perfect face, and I see the miracle I was given nine years ago.

So many people take for granted the gift of parenthood. They consider it their right. But the fact is, as parents, we’re the guardians of the souls of future adults who will inhabit this planet. We are given the precious gift of the continuation of ourselves in our children, first as they grow within us, then as they enter the world and take part in it. They learn by watching us, how we act and how we react.

I look at my daughter, and with every hug she gives me, with every time she takes my hand, with every conversation we have (and you have to listen closely, because Amethyst is soft spoken, but well spoken, even at the young age of nine), I rejoice in this precious, precious gift I was given. If anything, I hope I give to her the gift of knowledge, not only of life, but that of the fact that I love her, more than I thought was possible.

Happy Birthday Amethyst. Thank you for giving me the gift of motherhood.