I need your help

I’m going to cut to the chase with this one: If I had one wish, it would be for the eradication of Cancer.

Cancer is a nasty fucker. Cancer has taken from me more people than I can count on my hands. It is a disease that takes: lives, time, joy. 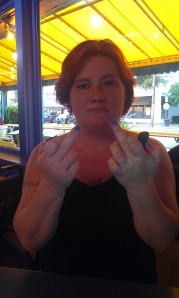 How I feel about cancer…

I myself had my own little battle with it back in late 2001: Following his instincts, my OBGYN ordered a pap-smear, a test I wasn’t due to take again for another eight months. The result? A very aggressive form of cervical cancer that if I’d waited the next eight months (like I’d been scheduled to) to have to test ran, it would have been too late for me. I not only would have lost my cervix, but most likely my life as well.

I’ve watched loved ones battle the illness. I’ve seen the devastation of friends losing their six-year-old son to the illness, when his biggest worry should have been what book his Kindergarten teacher was going to read the next day. Some have won their fight, more often than not, I’ve been the recipient of a phone call from a family member or friend telling me that we had lost yet another part of our hearts and souls to the illness.

So you can imagine I didn’t react too well when I found out my dear friend Melissa Graham was diagnosed with breast cancer (in fact, I threw my mouse across the room in anger, which was only made worse by the fact the damn thing was attached to my computer by a cord and snapped back and smacked me on my own breast).

I was blessed to meet Melissa through Babycenter.com’s message boards when I was pregnant with my oldest child in 2004. Melissa was a source of information on all things newborn and baby related, and we quickly developed a friendship via the internet. Every woman has a go-to friend when they’re pregnant and going through the newborn period, Melissa became mine. She was always available for a chat, always responded to my questions as quickly as she could, and always gave me a laugh one way or another.

Melissa and her daughter, Meleah

So I’m pissed off. And I wish I could do something. But Melissa lives several states away, and as much as I’d love to hop on over and help her out by being there for her by helping with dinner or housework or taking her daughter to and from school, distance makes that impossible for me to do.

I can’t take this illness from Melissa, as much as I want to. I can’t be there to hold her hand, or to support her and her family as they go through this. I won’t be able to sit in the waiting room when she has a mastectomy or while she’s undergoing radiation and chemotherapy. But I can use my voice as an author and a podcast personality. And I can ask for help. Which I need. I need your stories of your own experiences with cancer.  It can be your own battle with the illness, or what you went through when someone you loved battled the illness. You don’t have to be an author, you don’t even have to be a blogger. What you have to be is honest. I can put together a collection of essays and poetry about this fucking disease, and set it up where the proceeds go directly to Melissa and her family, which will hopefully at least lessen the financial blow from all the medical treatments she will be undergoing in the near future.

I’ll be taking submissions until September 30, 2013. Please email me yours at AmberMNorrgard@gmail.com, with the subject line “Cancer Can Suck It”

4 responses to “I need your help”