“The Allegory of Dusk”

Leave a comment Posted by Amber Jerome~Norrgard on October 15, 2012

A week ago, I previewed on my blog a snippet from one of the short stories in a fiction collection I was planning on releasing in early December. When I wrote the blog post, I had no idea what the collection would be named. I also had no idea when exactly I’d finish the collection. But fortunately, my imagination ran away with my ideas, and both title and stories came to me quite quickly. So quickly in fact that “The Allegory of Dusk” will be released this Friday, October 19.

I love it when my work takes over my life. 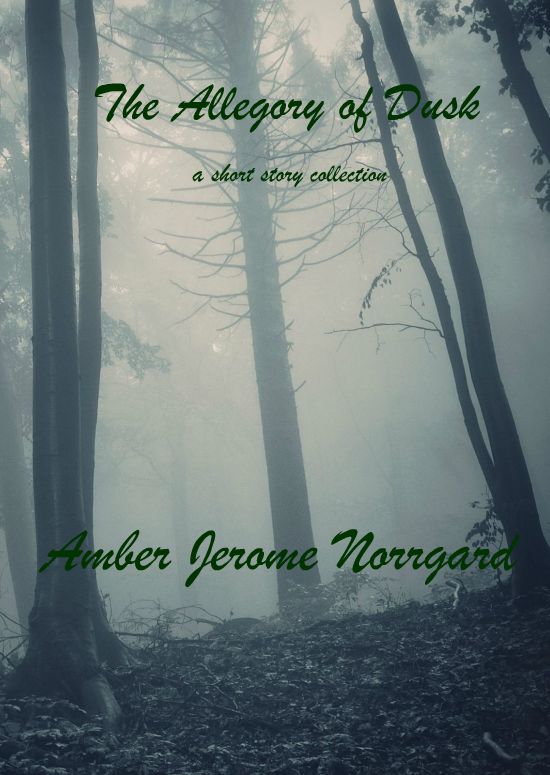 “Life most definitely is not fair, and at times, it is harsh.

What happens when the worst occurs in our life— when there’s no guarantee of redemption or of hope? When there is no ending in sight to what we go through when the bottom has dropped out? When everything we’ve hoped for, everything we have planned for has been ripped away painfully?

“The Allegory of Dusk” is an examination of the reality of life at its most painful and damaged.”

And I’ll admit, since I hate bullshit and I’m one of the most honest people you’ll probably ever meet, I’m a bit nervous about releasing this collection. In my previous work, there has always been a touch of hope, a safe haven where the reader can imagine things will turn out just fine. But Allegory is a departure from my comfort zone, both in genre, and in topic. Rather than end each story on a happy note, I instead went for reality. And I’ll admit, there were times when I was writing the short stories in this collection I had to take a step back and a deep breath and face the emotions the work brought out in me.

A few days ago, I posted about the illusion of happiness and happy endings. Allegory is true to the theme of that blog: the reality being that we’re not given any guarantees in finding happiness. Sometime, we have to face head on hurts and sufferings with no clue as to when life is going to ease up and give us a break.

In my own life, I’ve faced down heartbreaks and struggles, one right after the other, wondering when exactly I was going to catch a break. And at times? I did not. As a dear friend of mine recently said to me, “Life likes to bitch-slap you, and she likes to do it hard, at the worst possible time…”

“Write what you know.” I’ve heard those words thousands of times since I first began writing. As authors, we are the rulers over our characters. We determine their fates, how things are going to end, who’s going to live and who’s going to die, who’s going to fall in love, and who’s going to have their heart broken. And I could have found a path to the happy ending in each of the stories in Allegory. But I did not. Because what I know from my own experiences in life is not a happy ending. I know fighting against odds, heartbreaks, loss, despair, anger, and disappointment. But from those things, I’ve learned what true strength is. And like I say in the introduction to Allegory: “I didn’t write this collection with happy endings in mind, because I myself? I don’t buy into the idea of a happy ending. I believe, however, in the idea of peace, and of honesty.”