Five or six weeks ago, my dear friend Justin Bog jokingly suggested I spend the month of July 2012 writing a poem a day and publishing it.  In truth however, Justin really meant that I should publish a poetry book a day in July.  Which leads me to believe that either Justin is a.)certifiably insane, or b.) has a overly high opinion of my abilities as a writer.  Either or, Justin’s suggestion tipped off and helped to give birth to an idea that had been rattling around my head for some time now: A new poetry collection.  In the Gloaming was an idea that would whisper to me once I published The Color of Dawn back in January of this year: a poetry or a poetry and short story collection.

I’ve written before about how writing erotica makes me uncomfortable, but yet I still write it, and I still publish it, because writing what makes me uncomfortable, and writing it well, pushes me as a writer.  If erotica makes me uncomfortable, writing about my emotions, full out and in completely wide open honesty causes me to squirm horribly.  I can write about painful experiences in my life, but I have always done it in a removed manner.  When I began writing In the Gloaming, I said, “Fuck it.”  I pulled previously unpublished poems that were written honestly, but I hadn’t been okay with releasing to be read. I looked at experiences, both past and present, placing them under a high-resolution microscope and just wrote the mother-fucker.  When I finished each poem, there were tears: either from joy, or from heart ache.

Initially, In the Gloaming was to have several fiction short stories included.  But the poetry began taking over: I’d think I was finished, but then inspiration would grab hold of me and would not let go until I finally scribbled the words that were playing over and over again in my head.  After a frustrating day, and then evening, with my writing, trying to finish one short story meant for the collection, I went for a long drive.  It hit me while driving around aimlessly, Lifehouse blasting away on the stereo, that the short stories were not meant for this work.  That the poetry had over taken everything else.

Last Monday, I sat down to write.  And when I finished the poem, I knew.  In the Gloaming was complete.  Ironically enough, the name of the poem was “Finally”.  After being given the okay by my good friend, Author Melissa Craig to use a gorgeous photograph she had taken as my cover, I emailed my younger sister, and asked her for her help in creating the cover.  She came through as she always does: She takes some simple, mundane idea of mine and turns it into a thing of beauty.

There were the usual last minute editing snafus.  And then there was an unusual experience where when I went to hit “publish” on KDP’s website, my house lost power.  But there was no anxiety, no fear at publishing something so raw and from my heart, so laid out bare and honest.

I hope that you find something that touches you in this latest work of mine.  I myself began finding my true self while writing it. 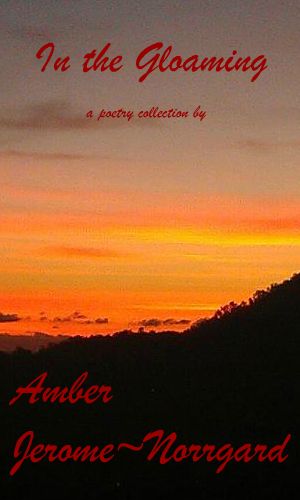